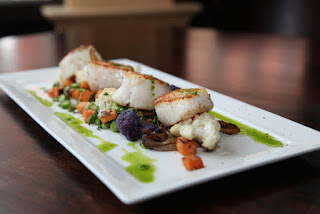 There are those evenings when you go out without a reservation and think you might never eat. We went to a restaurant with friends, and a soon to expire gift certificate. But there was a 2 hour wait. So we went to another restaurant, then another.

Our mistake was to be in Williamsburg, a great place to eat, but maybe not so much if you don’t live there and don’t know the next best place to try. Also, it was Saturday, amateur night.

We thought our goose was cooked.

Finally, we wound up at The Fat Goose. It looked promising: exposed brick walls, chandeliers, tin ceiling, only half full.

But all those tables were spoken for.

The host was very gracious, and sat us at the bar. He said in 15 minutes, if a certain table didn’t show, we could eat there.

Fourteen minutes later, they walked in.

Meanwhile, we were contemplating drinks. Fat Goose has a very trendy cocktail menu, but the new winter menu was all rum and bourbon, neither of which I like.

There were 2 IPAs on tap, including my fave, Smuttynose. But both were out. We sampled the Ommegang wheat beer, which no one really liked.

So we drank wine.

Conversation was difficult with our group, since we were lined up at the bar, but then the people at the corner left, so we moved there and ordered appetizers.

Remember when appetizers were called apps & no one had a smartphone?

So Fat Goose, of course, puts goose fat in things where it doesn’t belong, like a lovely looking lentil, pear and Stilton salad, or kale salad. But both were tasty without the goose.

Then, we got a table so we could order main courses. A progressive dinner in one small restaurant.

We also had wild mushroom toasts with goat cheese – the best thing on the menu.
Next time, a reservation.
Posted by WheelsandEats at 8:47 AM No comments: 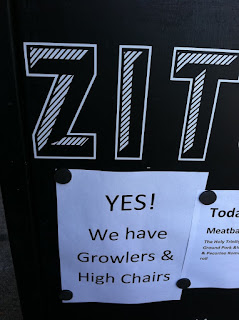 When a restaurant touts the origins of its meat, form four local butchers and specialty shops, I figure the vegetarian food is going to be an after thought. But Zito's Sandwich Shoppe in Park Slope, Brooklyn, puts as much care into its veggie sandwiches as it does in its meat offering, so this is definitely a vegetarian friendly place.

Of the 13 classic sandwiches, 5 are vegetarian (3 if you don’t eat fish). Plus you can create your own. All are served on brick oven bread baked by Il Fornaretto in Bensonhurst, or gluten-free bread from Everybody Eats in Park Slope.

The meatless was my first choice, with plenty of grilled portobellos roasted peppers and broccoli rabe, with artichoke spread. My only gripe was that it was too cold, so if you can let your sandwich sit for awhile, or ask the counter guys to heat it up.

But this brings up the problem many have with this place. The food is wonderful, but waits can be interminable. If you order arancini, Sicilian rice balls (there is an addictive veggie version, with spinach and homemade mozzarella) and sip a craft beer, you might be a little less puckish when your food arrives.

Sandwiches are huge, and make a more than filling dinner; at lunch, you might only eat half and save the rest for later. You could also split a sandwich and get one of the 6 veggie side dishes: faro salad with roasted corn, garlicky broccoli rabe or lentil with caramelized onions.

The eggplant parm, with more of that homemade mozzarella and a slightly too salty tomato sauce was a perfect counterpoint to the crusty bread. If you like breakfast for dinner, try the bargain Potatoes & eggs sandwich; scrambled eggs, fried potatoes, onions and parmesan cheese, with tomato sauce on the side.

The chickpea fritters were so meaty that my husband was convinced he had been given meat. These fritters are not like falafel at all, but with the lettuce, tomato and lemon, they were yummy.

Next on my list to try, before I start customizing my sandwiches, is the Sicilian tuna, with arugula and tapenade.

We were not bothered by our long waits, since the guys working there were so friendly and they have a great sense of humor. A family friendly place that promotes its high chairs and growlers has to be. Fill those growlers with Sixpoint craft ale to go, or drink a beer with your sandwich. There is also wines from Long Island based Gotham Project.
Posted by WheelsandEats at 11:16 AM No comments: